ADEMÁS Perfume bottle. This, in addition, is the new perfume and cologne fragrance created by the fashion designer Purificación García. We were commissioned with designing a single bottle for two products which respond to different uses and occasions, as well as being presented in two formats: 100 cc. for the eau de toilette and 50 cc. for the eau de parfum. The perfume bottle itself had to be able to transmit an image balanced between the aesthetics of the brand name stores and the image of the woman who will ultimately use the new product. To achieve that image, we have created a very subtle and minimalist architectural volume. This will fit in directly with the design of the stores themselves as well as transmit the image of the clothes that are sold in the stores: convenient, practical and feminine. The geometry of the glass bottle has been designed based on the square and has been prolonged vertically in two different respects: the two side surfaces are flat are parallel, neutral and plain in form, with the main faces of the bottle providing volumetric contrast and taking centre stage. On these side surfaces, an intersection is formed between a sloped surface and another slightly curved surface, creating a semi-elliptical, warm and feminine form. The serigraphy displaying the name of the perfume is in the upper part of this sloped surface, just below the cap. The delicate intervention of forms is enhanced by the contrast of the finishes: polished and transparent for the sloped surfaces, and a translucent frosted effect for the rest of the bottle. The glass volume is finished off tremendously with a matte aluminium cube: the cap. The contrast between straight and curved lines, the intersection between basic geometric forms and the combination of high quality materials work together to transmit very characteristic features of the Purificación García brand: balance, rationality, functionality and elegance. Produced by: Antonio Puig Perfumes Year of design: 2000 Year of production: 2000. designed by Josep LLuscà. 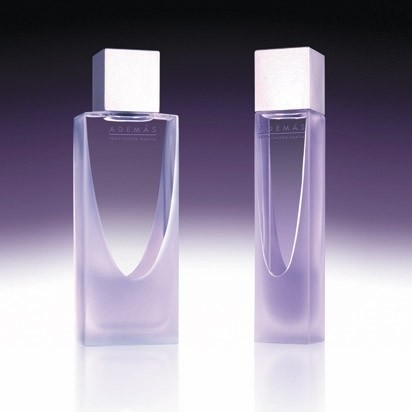