ETNA is a collection of ashtrays designed to be used both in public spaces as well as in domestic environments, thanks to the forms and colours used which make them easy to incorporate into any surroundings. The series is made up of four models: tabletop, wall-mounted, free-standing and with or without base. All of these versions are characterised by the subtle design lines and a geometric form which has drawn its inspiration from the basic square. Each one of the ashtrays can be divided into two parts which are clearly distinguished through the use of different materials. The head is produced using moulded chrome plated Zamak; the columns which make up the stand are in extruded aluminium and the counterweight and the base are in cast iron. In the case of the tabletop version of ETNA, the body is in pressed glass with the options of a transparent or frosted finish. The stand and the bases are painted in an aluminium - Ral 9006 - or anthracite colour. Apart from the clearly connecting the object with flames and ashes, the series also owes its name to the fact that the form of the opening into which the ash is deposited is reminiscent of an inverted crater. Produced by Vilagrasa Year of design: 1999 Year of production: 2000 www.vilagrasa.com 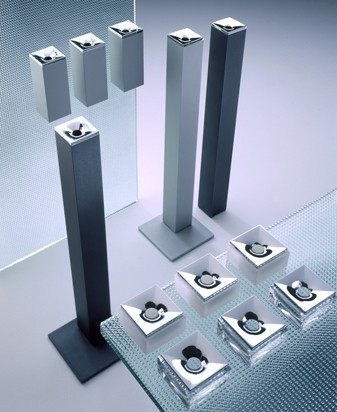