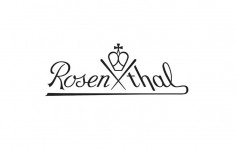 The ICONA collection of porcelain articles, designed for the Germany company Rosenthal, are characterised by their muted design lines and simple forms, which at the same time are rather striking. The series is made up of a plate warmer, a vase and a candle stick, the former and latter of which have a double function. The ICONA plate warmer can be used to warm plates and sauces. This design is composed of three elements: the support structure for a candle in pressed aluminium, a white or black circular-shaped porcelain component to hold the food that is to be heated and a glass cylinder, which is only used in the event of using ICONA as a small decorative candle stick. In the same way as with the plate warmer, the candle stick in this series has also been designed to have a double function. This is a white or black porcelain body section, finished off in a matte aluminium pinnacle, which enables the object to be used as a candle stick or as a small vase to hold a single flower. In this case, ICONA can be converted into a stylised and subtle complementary object to evoke ambiance. Lastly, the vase which completes the series is produced completely in white or black porcelain. Its irregular forms and its broad opening, which can hold large bunches of flowers, are its most outstanding characteristics. Produced by: Rosenthal Year of design: 1995 Year of production: 1995 www.rosenthal.de