TALL Sculpture This sculpture was created to commemorate the 150th anniversary of the Mina d?aigües de Terrassa. It is a circular water reservoir measuring 22 meters in diameter with a dark-coloured bottom which helps to further enhance the central element. Given that the mine lies directly underneath, a large-dimensioned, fusiform object has been designed, representing a sharpened axe, hacking at the ground, opening a kind of wound and releasing an energetic stream of water from the depths of the earth. In this way, the water emerges from the bowls of the earth to rush forward as a result of Man?s intervention, as though the water source had been discovered by digging into the earth. This unique central element is anchored to the bottom of the reservoir by means of a specially reinforced foundation area. It has an interior metal profile structure in galvanised steel which gives rigidity and secures the visible external covering to the bottom. The outer form is moulded in a composite PRFG material, in a high gloss coloured gel coat applied directly onto the mould. The piece stands 2.5 meters in height, with a base measuring 8 meters and a diameter of 70 cm approximately. Lit from the water by means of a halogen lighting system at the base of the structure, this element is complemented with a curtain of water that rises up from the base propelled by a system of water jets. Produced by: Mina d?aigües de Terrassa Year of design: 1991 Year of production: 1991 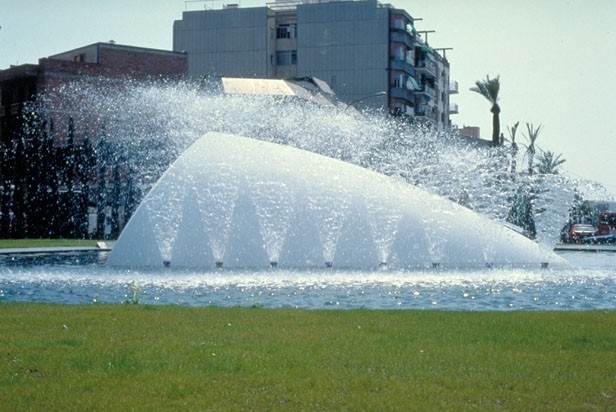