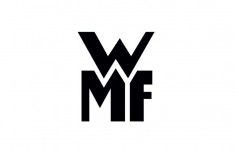 The SALMON PLATTER is a tray for presenting salmon, produced in stainless steel and wood. We envisaged simple solutions for its design and were interested both in the real form as well as the apparent form created by reflecting light and the reflection of the platter’s surroundings on the curves of the polished steel. It is through its form that an object starts to capture our attention. And undoubtedly contributing towards this capacity for seduction are the symbolic, sensorial or cultural aspects, which when added to its specific form characteristics, constitute the final image of this object: an image that was intended to be clear, precise and striking, but at the same time poetic and sensual.

Virtual forms were studied to design the SALMON PLATTER, contributing towards an elegant design, but which were not intended to be gratuitous. The design originated from the idea of a single piece, with no additional details: solely a sheet of 1 mm thick steel which is transformed into a platter by means of a single blow from the press, which, at the same time would also shape the handles.

Similarly, every object should play a secondary role through its forms. It should communicate, explain how it works, what it is used for; it should convey its function; but above all we have to like the object. For this reason, it was decided to design a platter that could evoke an image with a maritime connection, nautical, perhaps a fish, or maybe a ship, the abstract figure of a fish, or even the synthesis of the two. The SALMON PLATTER was given a double function. To achieve this, it was designed based on stainless steel, in which both the head as well as the tail fulfil the function of integrated handles. The platter can be used to serve cooked fish, and has a wooden board that can be joined to the base, and which can be used to slice or serve smoked salmon.